How This All Started

Now everyone is capable of a sap story where they tend to spew out shit explaining what it took to find themselves where they are now and how they became the bigwig so and so's they are today. Over all it's a really heart warming story (maybe we'll tackle a "draw my life"). Well, this story starts out in a psychology class, a college psychology class no less. A psychology class that used videos from YouTube to really tie in all the flavor, a class worth every penny being spent on it. This tan Greek kid sat in front of me and decided after one of the classes he found it just to start talking to the overly satisfied loud mouth sitting in the back corner. They began to talk abouteverything from video games, roms and emulators, YouTube greats like Egoraptor, JonTron and the guys from Two Best Friends Play, comics, programming and everything adored by any tech school nerd. They had everything in common: the recent breakup of a long term relationship, the height close enough to being a legal midget, and nerd pleasures from every topic. They spent every waking moment they had thinking of arcades (actual cabinets as well as MAME, roms and emulators) and playing video games. They became obsessed with reliving their childhood to full effect; born in the 90's they were accustomed to the best culture known to man.

How and Why Tiny Arcade Came To Be

Nik lived in a apartment style dorm while Alex lived in a suite Sophomore year. Nik introduced himself to Alex's friends and the world of video gaming unfolded. They played everything from shooters (Gears of War, Halo, James Bond series, etc.) to fighters (Marvel Vs. Capcom, Super Smash Bros. series, Street Fighter series, etc.). Alex worked on his arcade dream introduced by Nik and started by a guy Alex worked with at Target that had started a collection of roms from the 80's. Alex was determined to have a homemade arcade that was able to play any rom known to man, Nik gave support, helped out, leached and whenever he wasn't in class, talked about innovative ideas, and spent his time drowning in Twilight Princess in Alex's suite while everyone who actually lived there was in class.

Not a single moment was spent not playing Super Smash Bros. Brawl or Melee. Classes would end at 2:30 or so, two people would start the night of neglecting homework and studying. By the time everyone came back from classes, those purple controllers and wave birds were being swapped between these tech school boys that had no desire to spend time with the opposite sex and play sports like a normal "guy". Video Gaming became the backbone of their lives. 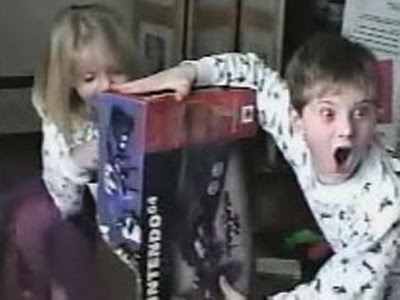 TinyArcade was influenced by multiple YouTube channels and the people that made them possible. They watched every video possible and studied everything they had to say: Two Best Friend's, Egoraptor's and JonTron's unbelievable knowledge of everything that Nik and Alex loved, they adored everything these channels had to offer for talents: Barry's AfterEffects animations and the art and animations from guys like Stamper and Chris O'Neill. They creamed over the humor that was produced from each channel. There was one other person that really brought this all together, and as I write this I'm starting to realize how he was the glue applied but unfortunately parted before he could see the glue dry. Their friend Christian was the third element that really made TinyArcade. He had Nik and Alex understand what they really loved; almost everyday they would watch intently as he played Banjo Kazooee and collected all that game had to offer, such menial tasks that were done instead of pursuing a major (he became undecided after architecture didn't work out). They discussed movies, marvel and everything video games with Christian. He dropped out of a Architecture major to follow his dreams to pursue a more fulfilling profession, graphic design, and moved back to New York. His love for animations and graphic design was also a huge part of TinyArcade. Maybe some day the TinyArcade channel will be blessed by his Hispanic excellence as well as all of his animating and artistic talents.

TinyArcade started the day Nik approached Alex about the idea of a let's play channel in the fall of their 2013 college year. Alex was extremely into the idea and the both of them worked on their image and what would make them different, when more worthwhile channels have already been established.They focused on a project that involved everything they already had at their exposure (without spending any moneys), that brought all their favorite's talents and elements into one, and a project meant for themselves that their audience would enjoy.

Now for why we would even bother with TinyArcade. We don't want to compete with the greats, we want to join them. TinyArcade is a newborn of the Egoraptor era. To answer the question with a rhetorical question: what do we want from TinyArcade? Well, what does anyone want from a successful channel like Pewdiepie, nigahiga(I feel this name is slightly racist) and Smosh? Well, thats exactly what we don't want, we don't want our developed channel to be the top channel only focusing on whatever everyone wants to see (we're not trying to suck any dicks here). We don't want extravagant gifts, no frankincense and myrrh, we couldn't give less of three shits if we make a single cent off of this channel. More than anything, we want to be enjoyed, we want to show off who we are and the talents that we have to offer. We don't want to waste anyone's time and we're not fucking around with who we physically are, this channel isn't about to upload a 3 minute video panned on our faces with a bullshit synopsis of worthless shit. We are here to add our talents along side the greats that were mentioned before. We admire the shit out of the guys from GameGrumps (Egoraptor, JonTron, NinjaSexParty), Two Best Friends Play and all of those animators like Stamper, Chris O'Neill, ElCid, psychicpebbels, and others. We want to join them and be admired like those guys remain. We want to offer the same thing that they want to offer, they offer what they think is funny, they do what they like to do and don't care about their reputation or their image. They molded their channels from a hobby that they loved and it grew. They developed a culture and proved themselves as very talented mother fuckers (if you're reading this: hollla atcha boy!!). They combined passion and entertainment into a culture that we want to be a part of, for the love of gaming.

-Alex
Posted by Tiny Arcade at 4:36 PM No comments:

If You Care About What Alex and Nik Think

Email Us Any Questions